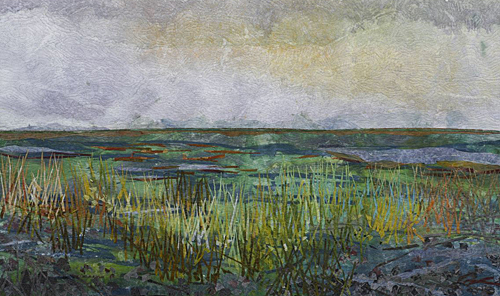 Going Out Going In with Barbara Lee Smith

Once upon a time, artists and poets contemplated Nature as one of the eternal verities, along with Life, Death, Love.

In modern times, the artist’s attention has been diverted to the disjunctions of the Industrial Age, the Information Age, mechanized war—and to the storms and stresses these forces cause both within the individual psyche and within the artist’s psyche to locate his style. In this welter, the eternal verities have lost their hold on the artistic imagination (and lost their Capital Letters), replaced by pursuit of “edge.” Thus in today’s art, death seems to drive life, not balance it; love is impossible to find or, if found, is devalued as “sentimental.” And nature? It’s mere backdrop to human ruin. Nature, as in landscapes and seascapes pulsing with meaning, is long-gone, an Arcadia, not “hot.”

Barbara Lee Smith, however, has always found Nature sufficient unto her day.

Picture her as a figure in the landscape, tall and elegant, her head full of worlds, her eyes on the horizon, or the near hills or, even nearer, the shifting depths of water.

Like Winslow Homer, Barbara seeks not just to describe nature, but express how she feels about it. She sees the harshness and dangers there—the dark—and seeks to illuminate and elevate that dark by means of light. That, simply put, is her project—a project so grand that the variations to be played out are infinite.

Early on, she understood the truth of Homer’s comment to a friend: “It is a gift to see the beauty of nature.” This gift, however, is not an invitation to prettify. In Barbara’s head she hears the voice of another artist, a contemporary, Helen Frankenthaler, enjoining in a New Yawk accent: “Don’t make it gorgeous, make it good!”

Barbara aims for Beauty—yes, she capitalizes the word, bless her—and she is very good at creating it.

Fittingly, Barbara came to her subject—Nature—naturally.

Growing up on the Atlantic Ocean, on the island of Cape May, New Jersey, she went to sleep with the sound of the ocean echoing in her ears. In a strict household, it was such release to feel love for the water, the light, the sand. A local saying about “sand in the shoes” fore-ordaining return to Cape May was on the mark about the sand, but not about destination: In her artistic maturity she headed, instinctively, for the Pacific Northwest and its endless marvels of Nature. It’s no accident that today Barbara lives on an island (Raft Island) in the Puget Sound, tree-covered and tiny, her house and studio positioned, at water’s edge, to catch the sunrise and the north light.

Barbara’s journey to find best expression of her subject was, as artistic development goes, pretty straightforward.

Having completed her child-raising responsibilities, at age 39 and living in Chicago, she enrolled in graduate school. There, she began assembling the elements of her technique—a combination of painting, collage, and stitching. (How clever of the artist to take stitching—mastered as a home-economics major in college, a major she was obliged to take but didn’t much like—and recycle it later for a higher purpose and greater emotional reward.) A book she wrote, Celebrating the Stitch, a survey of her subset of artists, served as a kind of post-graduate school.

Then, mindful of the debt she owes her fellow artists, Barbara stepped away—and has made a sui generis art of her own, admired and collected around the world.

I came to Barbara’s work only recently. I’d been urged to attend a gallery opening of hers by a mutual friend, who’d characterized Barbara as a “nature artist.” I confess I wasn’t too excited; as a columnist trying to apply Reason and manufacture Hope in a fear-filled post-9/11 America, nature seemed…beside the point. But one look at the walls—“Oh,” “Oh,” “Oh,” “Aha….”—and listening to Barbara give a brief talk, not art-speak but philosophical, I realized what I’d been short on: Beauty. I also recognized in Barbara a comrade: an artist sul serio, one who capitalizes The Big Ideas, The Ultimate Things. “We should talk,” I said; she agreed; and we have, and become friends.

A visit to Barbara’s studio, as with any artist’s studio, is to enter a one-person realm humming with industry; in Barbara’s, an actual industrial sewing-machine hums—clacks, actually—but, that’s Step Three in her process. Step One is the painting, which she does using big gestures, to create a ground. Then, excising from the painted canvas the piece that will become the final frame, she pins it to the wall and, with much backing and forthing, using leftovers from the painted canvas, she attends to Step Two: the collaging, by which she creates the image—reeds swaying, water rippling. Image found, she irons it in place. Then, Step Three: the stitching, which gives the overall its texture and without which the overall is not complete. Bello, che bello, all of it, and done with exhilaration.

When artists meet, what they love talking about are their sources, their philosophy, their purpose—things which the madding crowd outside the studio doesn’t always “get” and which another artist and art lovers do.

We quickly dispatch what our common purpose is not: it’s not about “edge”—the prevailing need to shock, show life’s underbelly. That pursuit, we agree, has yielded so little and cost so much; also, as Barbara says, “It’s overdone.” In fact she quotes me back to myself when in a column I wrote that, in pursuit of edge, the West has lost “meaning, mattering, beauty, wit, a sense of the sacred.” (Barbara finesses the potential conflict between us—the artist as observer vs. the artist politically engagé: She considers my pursuit of Reason to be a thing of Beauty. Plus she assures me she’s a “news junkie.”)

In essence a seeker, Barbara’s artistic purpose is to retrieve those lost things—meaning, mattering, beauty, wit, a sense of the sacred. She cites as a guide in that quest the words of French philosopher Gaston Bachelard:

“Each one of us should make a surveyor’s map of his lost fields and meadows. In this way we cover the universe with drawings we have lived. These drawings need not be exact. But they need to be written according to the shapes of our inner landscapes.”

Barbara has been faithful to her inner landscapes. It’s why her work resonates so deeply: She shows us profound things the modern world has forgotten but desperately needs. It’s why she gets up at 4 a.m.—to watch the sunrise, to renew her profound bond with Nature. It’s why she wants her ashes scattered where land meets water.

For now, though, there’s much more work to be done. I wonder: In a forthcoming landscape or seascape, might she insert a figure, a seeker, as a kind of self-portrait….?

I ask Barbara what last thing I need to know about her. We speak of the planet in ecological peril: “I do fear that the earth may cease to exist,” she says. To avert that catastrophe, she has this hope for her work, and this benediction: “I want people to see, yes, and care.”

Barbara Lee Smith: Her Art pleases and points the way.